August 2010 is when my life turned upside down!

After having a headache for almost 2 weeks, my partner nagged me until I gave in and went to see my GP about it. All I was able to tell my GP was that I "just felt rubbish".... along with the headache! He had a look in my eyes, asked some questions, had another look, and spent about 20 minutes doing that! He then told me... "I don’t want you to worry, but I want you

to go to the hospital just to be checked over. It’s just to be on the safe side, and I’d put my house on everything being fine"....

So, with that, off I went to my local hospital! I was admitted to an assessment ward straight away, and then the tests began!

The doctors asked a lot of questions, and tried to tell me I had a migraine. But, I knew it wasn't. They gave me pain relief, which did nothing, and said if I still had the headache in the morning then I would have a CT scan. Following morning - still had headache! Off I went for a CT scan! The following day came the results - two doctors walked in and started talking about a problem with my scan. He then stopped and said "do you want us to tell you this now"..... (as I was on my own), concerned, I said yes, and that’s when they told me I had a brain aneurysm.

Tears followed, then a phone call to my closest friend who came straight to the hospital. By the time she arrived I had already forgotten the words the doctors had used (memory was/is rubbish - thanks IIH!) so we got someone to come and explain things to her, as I couldn't.

All the family were worried, nobody really knew what was happening! I was told I would have another CT scan 2 days later. Unfortunately 2 days turned into a week, and when I finally had the 2nd CT scan, I was told that everything was clear. No aneurysm, nothing!

We all had mixed feelings of relief and anger! 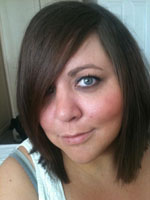 So, they needed to find out why I still had the headache! They didn’t seem to know what to do, and after 10 days of being in hospital they decided to give me a lumbar puncture (LP). Not really understanding anything about what they were doing, I was told my opening pressure was 28. This meant nothing to me! They then told me they were going to arrange for an eye specialist to come and see me. The following day I suddenly felt very ill. I felt like my head was being squeezed so much it was about to explode! If I stood up I was sick. Even just walking to the toilet had me in tears because of the agonising pain. I spent 2 days like that, gradually getting worse and worse, until the 3rd morning, they sent a neurologist to see me. By this time I was sobbing and couldn’t stop. The pain was unbearable and constant. I’d had enough! The neurologist walked straight to my bed and took away all my pillows and told me to lay down flat. I did, and was amazed that all of a sudden the immense pain

I had been in just vanished! That’s when I found out about low pressure headaches - a common problem after having an LP! If only someone had told me that 3 days earlier!!

That same day I saw the eye specialist, and it was him who told me I had "BIH".... That’s all he told me, and I knew absolutely nothing about it! Thank goodness for Google and the wonderful people I found on the IIH.org.uk support forum!

I was discharged from hospital the following day with a prescription for Diamox and an outpatient appointment to see the neurologist.

I went home and I struggled. I had a constant headache, nausea, whooshing in my ears, and I "just felt rubbish"! I managed to get to January 2011 before the headaches became unbearable and I had my 2nd LP, and an opening pressure of 28 again. I felt an instant relief and the headache seemed to just disappear! And I only had to cope with a low pressure headache for 2 days! Then I just carried on as I had before. Outpatient appointments, Diamox, painkillers.... Until March 2011 when I had the 3rd LP. This time the opening pressure was 35. I contacted my neurologist to let him know. 9 days later, the headache was so bad that I went back to hospital to have my 4th LP. With an opening pressure of 40, the highest for me so far, my neurologist decided that the medication wasn’t working, and as the swelling in the back of my eyes was getting worse, it was time to consider surgery.

I received an appointment to see a neurosurgeon. I went to see him, and he told me that I would have a VP shunt..... in 3 weeks time!!

I focused on the positives of hopefully feeling better after having the surgery, and tried to put any worries to the back of my mind. 3 weeks later and I had VP shunt surgery on June 9th 2011. I had more hair shaved off than I expected, but I felt good, considering! Five days after surgery and I was allowed to go home. I felt good! The day after I went home, I felt well enough to go shopping!! I was amazed at how well I felt, and so were my family and friends! I was also able to look back over the past 10 months and I realised just how ill I had been!

My surgery was a success, and when I saw the surgeon again 6 weeks later, he told me he was happy with how things were, and that he didn’t need to see me again.

I saw my neurologist 2 months after the surgery, and he was over the moon at how well I was. He checked my eyes and was thrilled to see that the swelling I’d had, had now gone right down.

It’s now 8 months since the surgery. Unfortunately I have been suffering with my old symptoms for the past week, and am hoping to see my neurosurgeon soon to find out if everything is ok with the shunt. I’ve had such a great 8 months of feeling well and even getting back to working again, so I’m hoping that the symptoms I’ve had for the past week are just a blip and things will get back to being ok again.

I’m one of the lucky sufferers of this horrible condition as I have a very supportive family and partner, and I couldn’t have got through everything without them. I know it’s very hard for some people to understand, and it can also be frustrating because a lot of the time we "look ok".... and people think it’s "just a headache” ...but it really isn’t. I can’t even describe the pain - and its worse when people don’t believe there’s anything wrong. All we want is for people to understand that we don’t want to feel like we do. It’s not "just a headache" it’s a life altering and debilitating condition, but it can be easier to deal with when you have the support of those you love.